skip to main | skip to sidebar

Boris Watchers has been set up to scrutinise the new Mayoralty of Boris Johnson.
The blog aims to become a Wiki-style tool for constantly scrutinising the new administration in City Hall.
We sure can't trust the Evening Standard to keep an eye on him!
email me at gusbaker@gmail.com to get the password so you can help Watch BoJo!

BORIS JOHNSON: A MAYOR FOR WAR

Boris Johnson has withdrawn London’s membership of the global ‘Mayors for Peace’ initiative, founded by the Mayors of Hiroshima and Nagasaki, CND has learned.

Mayors for Peace – a UN registered NGO - was founded by the Mayor of Hiroshima in 1982, after the UN Special Session on Disarmament. Atom bombs were dropped on the Japanese cities of Hiroshima and Nagasaki in 1945 by the US air force, resulting in hundreds of thousands of deaths, and the devastating consequences of radiation poisoning affecting subsequent generations. Since that time, Mayors of those cities have felt a responsibility to ensure that such tragedies do not happen again: ‘To prevent any repetition of the A-bomb tragedy, the cities of Hiroshima and Nagasaki have continually sought to tell the world about the inhumane cruelty of nuclear weapons and have consistently urged that nuclear weapons be abolished.’1

Mayors for Peace’s primary goal is ‘to work internationally to raise consciousness regarding nuclear weapons abolition.’ There are currently 2,277 member cities in 129 countries, including Paris, Berlin, Rome, Ottawa, Los Angeles and Sydney.2 Members are drawn from across the political spectrum. Mayor Akiba, the Mayor of Hiroshima, believes that the role of city mayors in raising awareness of nuclear weapons is key, given that cities are the targets of nuclear weapons.

Kate Hudson, Chair of CND, said:
‘We were aware when Boris Johnson was elected that he supported Britain’s nuclear weapons system Trident, but we find it appalling that the Mayor should reject participation in an international body committed to the global abolition of nuclear weapons.

‘Every Conservative government has supported Britain’s participation in the nuclear Non-Proliferation Treaty, the goal of which is global nuclear disarmament. This decision suggests that Boris Johnson is retreating from that common goal. This decision is insulting to the people of Hiroshima and Nagasaki and the work of their Mayors for global peace, and goes against the views of the majority of the British people, who support global nuclear disarmament.’

Jenny Jones, London Assembly Member and former London Chair of Mayors for Peace, said:
‘Mayors for Peace is an organisation working for cities and their residents to be free from the fear of nuclear annihilation. For London to withdraw sends out a signal that peace isn’t an issue the Mayor wishes to engage in. Perhaps we can’t expect anything better from someone who voted for the war on Iraq.’
Posted by Boris_Watchers at 14:36 1 comment:

Boris Johnson on the Tube Party

So Boris has his first Press Conference as Mayor of London and defends the Circle Line Tube Party which was celebrating the last night of drinking on the London Underground.

He said "It has been anthropologically misunderstood. I think what we had there was a kind of exuberant Celtic style wake." Daily Telegraph.

We're not exactly 100% sure what that means but are sure that Boris fans will find it hilarious. While we find out you might be interested in seeing some photos from the evening: 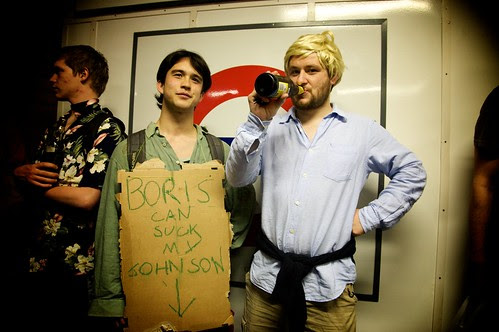 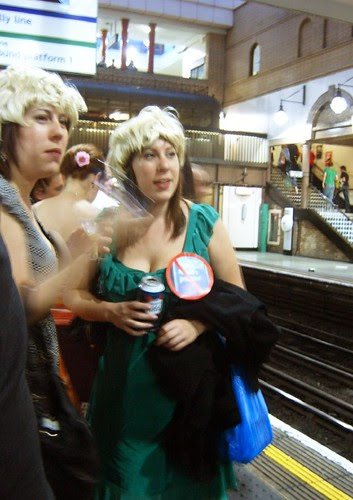 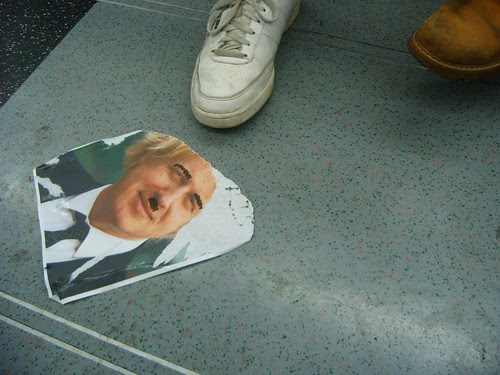 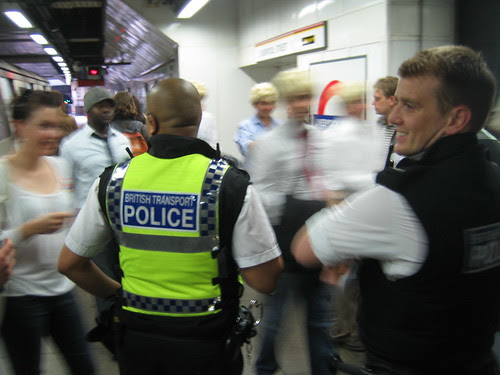 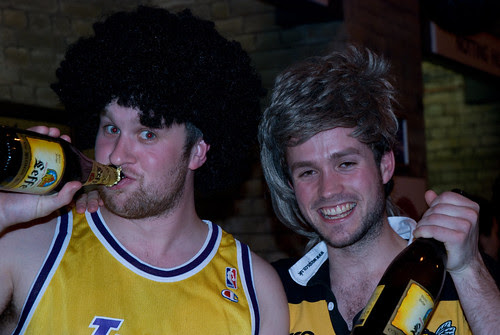 Posted by Boris_Watchers at 05:32 No comments:

Twenty five days into his new Mayoralty, Boris Johnson today announced his plans to double the bus fares of Londoners on income support.

City Hall announced today that it would end the agreement negotiated between London and Venezuela which guaranteed half price bus fares for Londoners on income support.

In exchange for contributions towards energy to power London buses from the oil rich South American state, TFL had previously offered advice on how to manage transport policy. However The Mayor this morning said that he believes this mutually beneficial agreement made many Londoners feel "uncomfortable" and thus the deal would not be renewed, effectively doubling the cost of bus fares for the poorest people in London.
The changes will take place six months after the deal runs out in August, meaning that as people's Oyster cards expire they will have to pay an 100% increase for their journeys.

Former Mayor Ken Livingstone was quick to comment calling the move "a direct attack on the poorest Londoners" which "gives us a taste of what we can expect from the Johnson administration. Thousands of Londoners are being attacked by the Mayor of their city by this decision."


"Boris Johnson's London will be a Tory laboratory" read the Telegraph's headline on May 4th. It has become clear today what that means; right wing cronyism and sustained attacks on the most vulnerable groups in society.

Routemaster much loved Double Decker bus may never be built

Wasn't one of Boris Johnson's campaign pledges to bring back the Routemaster as the bendy bus was evil? Wonder how many people voted for Boris because of that? 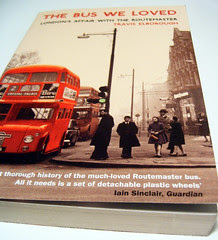 Who knows? What we do know is the following:

"The Mayor's plans for a newgeneration Routemaster may not happen, his new transport boss admitted today.

Kulveer Ranger, Boris Johnson's director of transport policy, said that a design competition would be launched - but if no bid was good enough they would look again at the pledge.

He added that although Mr Johnson is very keen to bring in a new-style bus in place of bendy buses, they would not press ahead with the idea for the sake of it.

Mr Johnson made phasing out bendy buses a priority, initially saying new Routemasters would cost £8million to run with conductors. However, he later admitted the figure would be nearer £100million." said The Evening Standard

The report continues: "In a visit last week, mayor of New York Michael Bloomberg also warned Mr Johnson to get rid of any manifesto pledges immediately which looked unlikely to work."

The Tory Troll Blog says "But only one week into his tenure it is clear that Boris must have known full well that this pledge was as dodgy as its costings, well before the capital went to the polls."

Boris Watch says "How many times during the campaign did we have to listen to Boris lecturing us on how Ken had once said "only some sort of ghastly, dehumanised moron would get rid of the Routemaster", then done so himself; and how Boris Johnson, knight in shining armour, would be riding to the rescue with a new generation Routemaster to save us all from the moron’s work? I don’t know the answer to that question, but I know it was a lot.

But just how much of a ghastly, dehumanised moron would you have to be to spend nine months telling people that if you become Mayor you will bring back an open-backed, conductor-managed "twenty-first-century Routemaster", flying in the face of expert advice and analysis of costings and practicalities, touting this as your flagship policy for months on end… only to have your transport adviser reveal, within your first fortnight in office, that chances are no such thing will ever happen at all?"
Posted by Boris_Watchers at 05:15 1 comment:

The legal woes of Bojo and his Cabinet

As regular readers of BorisWatchers will know, our new Mayor is no stranger to legal problems.
However few would have predicted that with all the Tory advisers money can buy, Boris has still arguably managed to break the law with his appointment of Sir Simon Milton and Kit Malthouse both of whose appointment is seen as a serious conflict of interest.
Milton is prohibited from serving in the Mayor's 12 appointed staff as Councillors are not allowed to take senior positions in regional government while Kit Malthouse's position on the assembly should prevent him taking part in Boris's executive.

From 'The Tory Troll'
By appointing a member of the assembly into the Executive, Boris has therefore interfered with the separation of powers that enables the executive to be effectively held to account.


To try and get around the problems with Milton's status as a Councillor, Boris has exploited a legal loophole and appointed him as a "consultant". While with regards to Malthouse a spokesman for the Mayor said ""This is a grey area and we are trying to come up with new protocols."
Rough translation meaning that City Hall is working on a way to try to get around the law so Boris can ensure the Assembly does not work properly.

The transparency promised is clearly nowhere to be seen.
Posted by Boris_Watchers at 15:20 No comments:

The Guardian report that "Hundreds of people will bid goodbye to drinking on the London underground with a subterranean cocktail party on the Circle line, following a viral campaign on Facebook." 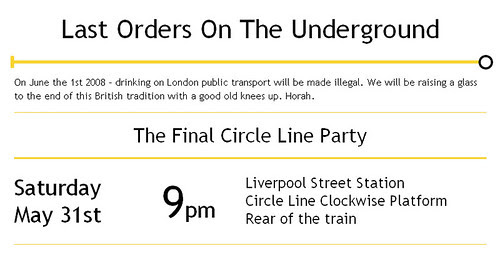 "a formal umbrella site has now been set up for the combined event, Last Orders on the Underground.

One of the organisers, James Darling, 20, a web developer from Snaresbrook, east London, said: "I think it's going to be very interesting. I am not quite sure they can do anything about it.

In Darling's party, the importance of good behaviour and respect has been impressed on attendees, as well as responsible drinking. Participants are also encouraged to turn up in formal attire. The event will be a 'gentrified affair'.

He insisted he was not making a protest but "making the most of the current law while [we] still can". The introduction of the ban was "a very easy thing to do" for Johnson, said Darling,"

It will be interesting to see how the Evening Standard are going to report this, as they seem desperately keen to promote themselves as neutral on the Boris Booze Ban coverage. See their email to the London Underground Blog

If you plan on going to the "normal" later party you might want to get in your order for the "Don't Blame Me, I Didn't Vote Boris" T shirt fairly quickly to make sure it arrives in time for the party.
Posted by Boris_Watchers at 07:27 No comments:

The londonpaper have hit the nail right on the head when they reported about the Mayor's "true blue Tory knees-up" :

"His big night out came on the same day as he announced a booze ban on the Tube - but the mop haired Mayor was rarely spotted without a glass in his hand." 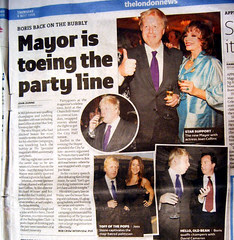 Interesting that the Londonpaper also made the same point as the London Underground Blog - even though Annie made the comment several days before. Both she and them found irony in his election victory speech "Let's get cracking tomorrow and let's have a drink tonight", when one of the first transport acts was to ban drinks on the Tube. (see the penultimate paragraph in the report from the Londonpaper which can be compared with the opening of Annie's blog post).

Nice to see bloggers possibly influencing how the press report stories again! Perhaps Mayor Boris may take up Gus's offer of an interview after all.
Posted by Boris_Watchers at 08:01 No comments:

The password to this site has been made publicly available and thus I cannot be held responsible for entries posed. Contributors should note that all material, quotes etc must be sourced properly subject to deletion and password changing.